Who We Are ▾

The school takes its name from Our Blessed Mother, Mary, and as a result has a distinctive Marian flavour. Mary is looked to as the shining star that guides us in our Christian journey. She is seen as the ultimate example of someone who let her light shine as a thanksgiving for all God had gifted her with.

The title of Star of the Sea (also known as Stella Maris) is an old title bestowed on Mary. Just as a lighthouse guides the ships safely away from danger and towards the safety of the shore, Mary is our guide who shows us how to navigate the struggles of life to the joy of being with her Son, Jesus.

More than a lighthouse though, our Lady is likened to a star whose rays are emitted brightly and endlessly without harm to itself. As a star, Mary guides us just as the star led the wise men to the Christ Child.

Breslin House is named after Mrs Breslin who played a vital role in handing on the faith to the young people of Gladstone after the Sisters of Saint Joseph left in 1879.

Until the arrival of Dean Murlay as Parish Priest in 1901, Gladstone had only a five year period between 1873 and 1878 when it had a resident priest called Fr Borge. Mrs Breslin helped to keep the faith alive in the parishioners of Gladstone, running catechism classes for the young, which often gathered many adult listeners as well as she was such an interesting teacher.

They would gather in the small wooden chapel where she also led them in the rosary and hymns of worship. In a place with no priest, she showed great compassion to those who were on their deathbed, praying with them to comfort them in their last moments. It is said also that she taught the children in her own home in Goondoon St continuing to teach the students until the Sisters of Mercy arrived in 1900. 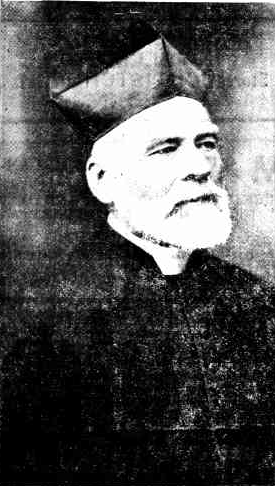 Murlay House is named after Dean Charles Murlay who was a Marist priest born in France in 1855. He moved to Rockhampton in 1863 to care for the Diocese until the appointment of Rockhampton’s first bishop.

He celebrated Gladstone's first official mass during a visit made as part of his pastoral visits throughout the Parish of Rockhampton. He was respected by many as being a priest for all classes of people. He was also known to be a man with great zeal, physical strength and business skills, securing many important Church property sites in Rockhampton including the Cathedral site and the Bishop's residence.

He left Rockhampton in 1883. Rockhampton had been made a separate diocese with Rev John Cani D.D. as its first Bishop. Dean Murlay moved to Sydney where he joined the Marist Fathers. On April 24 1901 he moved to Gladstone as Parish Priest. He invited the Sisters of Mercy to teach in Gladstone and by January 19, 1902, the Star of the Sea Church /School was opened and classes commenced. He died on October 6, 1908 and was buried in the Gladstone Cemetery.

Marsden House is named after Fr Lionel Marsden was who was Parish Priest in Gladstone after the war.

Soon after being ordained a Marist priest in 1940 he was appointed as AIF chaplain and experienced all the horrors of the Second World War, including working on the Thai-Burma railway. He constantly preached love and forgiveness to the soldiers he ministered to but was caught unawares by the anger he felt after he was treated roughly by a Japanese soldier.

His anger turned to hatred and it took a lot of prayer before he found forgiveness in his heart. He pledged to work for reconciliation if he lived through the war and ended up being the founder of the Marist Mission Centre in Japan.